1 . Describe the interrelation between preformulation and formulation process. 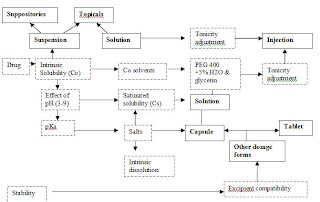 ( Refer to aulton page 137)
- Preformulation stages are denoted as dotted boxes while formulation stages are solid boxes.
- In order to develop three of these dosage forms, tablets, capsules and injections, it is necessary to have the fundamental physical and chemical properties of the drug molecule and other derived properties of the drug powder are obtained.
- This information is essential to dictate many of the forthcoming events and approaches in formulation development.


2. Enumerate the importance of salt formation and crystallization of active pharmaceutical ingredients in pre-formulation studies.

- Major improvement in solubility can be achieved by salt formation.
- Preferably salts should be prepared from weak acid or base to prevent instability in tablet or capsule formation as more hygroscopic drugs tend to dissolved in its own adsorbed films of moisture.
- Less soluble salts tend to be less hygroscopic and form less acidic or basic solution which is useful in injection formulation.
- The pH of injection should be in between 3-9 to prevent vessel or tissue damage and pain at injection site. Furthermore, oral syrups should not be too acidic to make it more palatability.

- A weak base tends to be freely soluble in the gastrointestinal tract with no absorption seen as the drug is in ionized forms and absorption delayed until the intestine and vice versa for weak acid.
- Unlike weak base or acid, formation of salt allows better control of the pH of diffusion layer.
- This is an advantage as the diffusion layer acts as a buffering agent that adjusts the pH of the drug according to its environment in. Thus maximize the dissolution rate. Plus the dissolution rate of salt is usually greater than parent drug.
Posted by PinG at 1:56 AM